China’s real estate sector is often described as «the most important sector in the world» because of the importance it has amassed in recent decades in the Asian giant’s growth model. We analyse how significant a role it plays in the Chinese economy and the risks of the Evergrande effect. 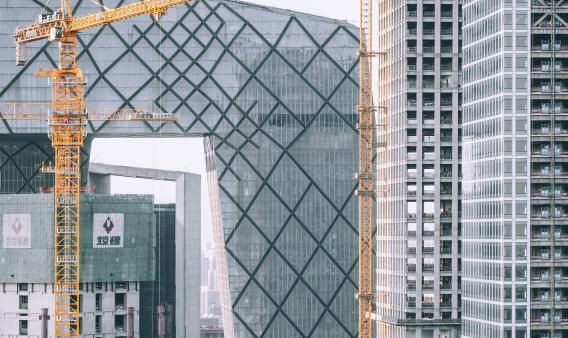 Imagine an economy which only produces a single house as a final product from three materials: roof tiles, bricks and steel (which are also produced domestically). This house was sold to the final buyer for 1,000 yuan and the materials cost the builder 800 yuan. How important is the construction sector in this economy? One could say that construction would account for 20% of GDP: by combining production inputs and building the house, the builder adds a value of 200 yuan to the economy. Another answer could be that construction accounts for 100% of GDP, once everything else produced is incorporated into the final product sold by the sector. After all, if the demand for housing fell, the demand for building materials would also fall.1 What is the correct answer? Both.

However, it is important to know which measure is most appropriate for estimating the macroeconomic effects of a slowdown in the sector, especially in the case of China. Not in vain, China’s real estate sector is often described as «the most important sector in the world» because of the importance it has amassed in recent decades in the Asian giant’s growth model. The country’s growing urbanisation, the development of the financial sector and the appetite of domestic and international investors, among other factors, have led to a real estate boom in recent years. To appease this boom, the country’s government initiated a series of regulatory measures.2 However, the combination of these restrictive measures with the high levels of debt of some of the major property developers (notably Evergrande, with some 300 billion dollars in debt) has heightened concerns over the risk in the sector. Even the Fed recently mentioned its potential to destabilise the global economy.

How important is the construction sector to the Chinese economy?

If we look at the activity of China’s construction sector, we can see that its relative importance in the economy is considerable (7% of GDP), but it is not significantly greater than in some of the world’s largest economies (see first chart). Notably, the sector’s relative weight lies below what was observed in Spain in the 2000s, when the construction sector accounted for over 10% of GDP. 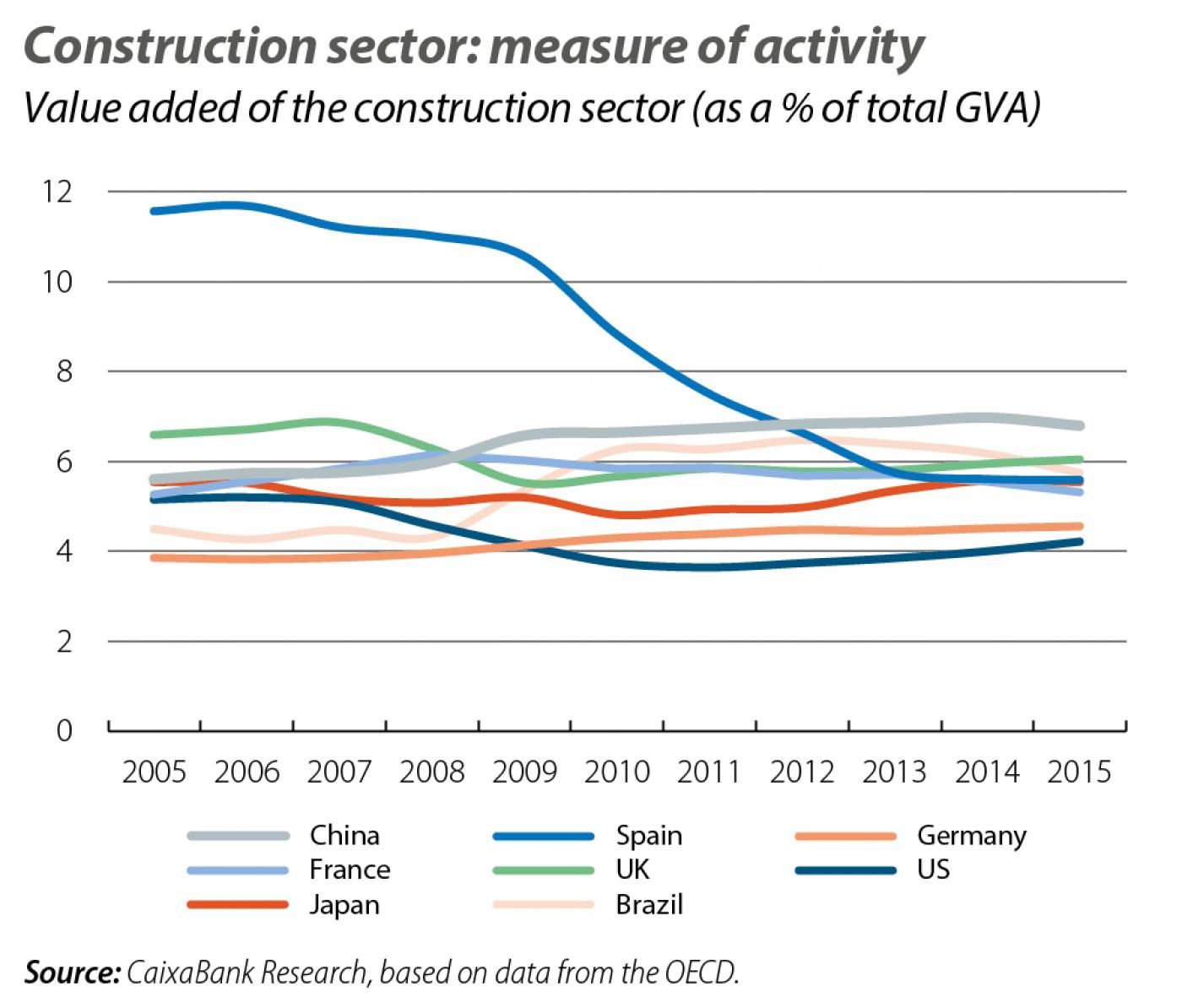 On the other hand, if we were to add real estate activities to this calculation, the sector’s new relative weight would reach 13% of GDP in China, substantially below that observed in other countries (17% in Spain, the US and Japan; 18% in Germany, and 20% in the UK). This difference can be explained by the fact that China’s real estate market is still in a development phase, where construction represents a larger proportion of the total.

Another way to calculate the sector’s importance to the economy is by analysing what portion of final demand it accounts for. In other words, we must analyse both its direct contribution to the production of goods and services as well as its indirect effect due to the additional demand it generates in the economy through its connection to other sectors, known as carry-over effect. Following this approach, besides the construction sector’s direct relative weight in the final demand of the Chinese economy (7%), we must also factor in the additional demand which it generates in other sectors, such as in real estate services (0.4%), in trade and basic metals (2.0% in each sector), in financial activities (1.9%) and in capital goods (0.9%) (see second chart). Overall, the carry-over effect of the construction sector amounts to 17.5%. This implies that, in terms of final demand, we would arrive at an estimate for the importance of the real estate sector in the Chinese economy of around 24% of GDP.3 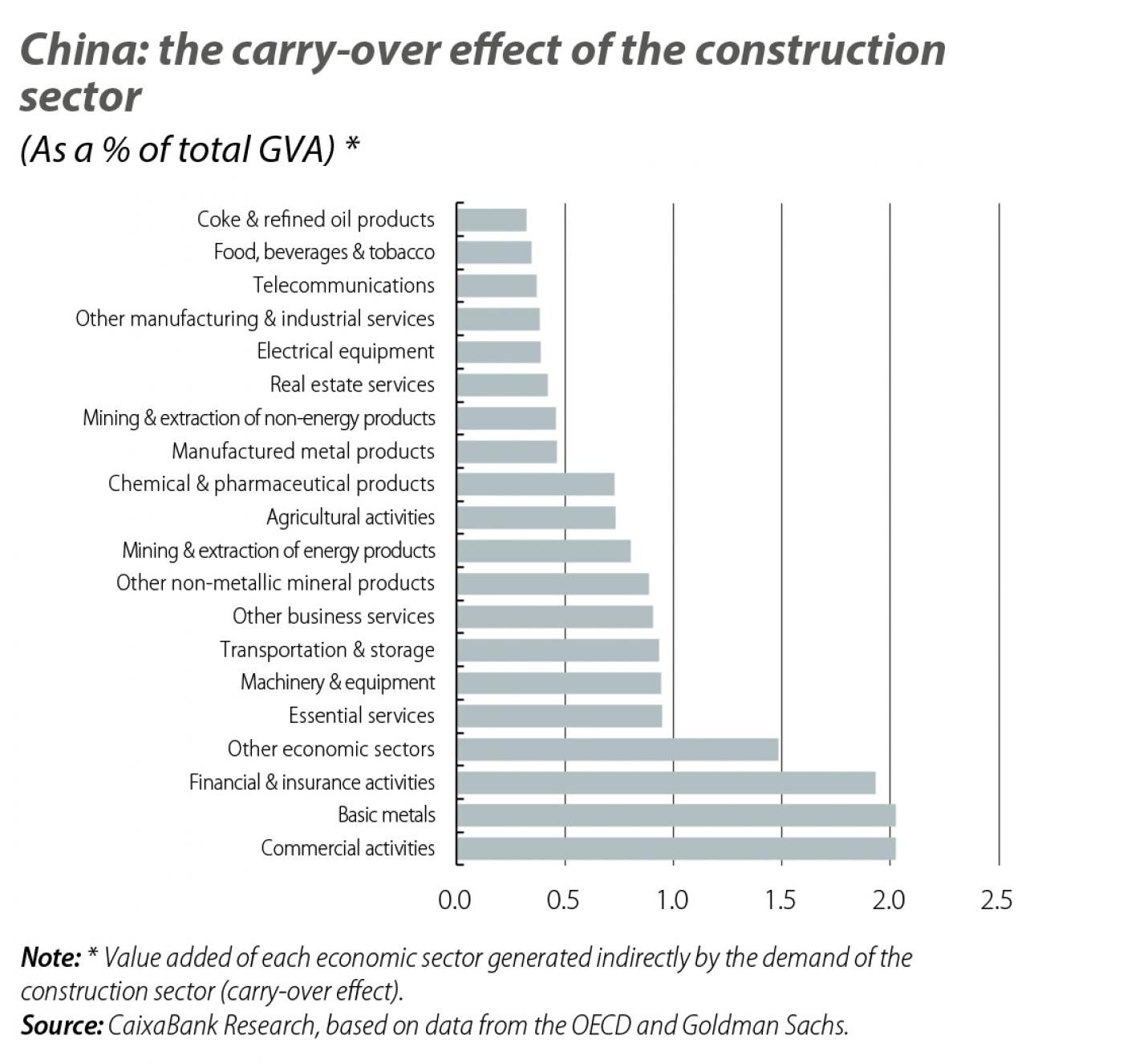 Performing a similar exercise for the direct and carry-over effects in other large countries, we find that China’s 24% relative weight would be roughly similar to that of other emerging economies, and slightly above some Asian neighbours such as Japan and South Korea (both with 20%). On the other hand, it would significantly exceed the figure for other advanced economies, where the sector accounts for around 18% of GDP (see third chart). 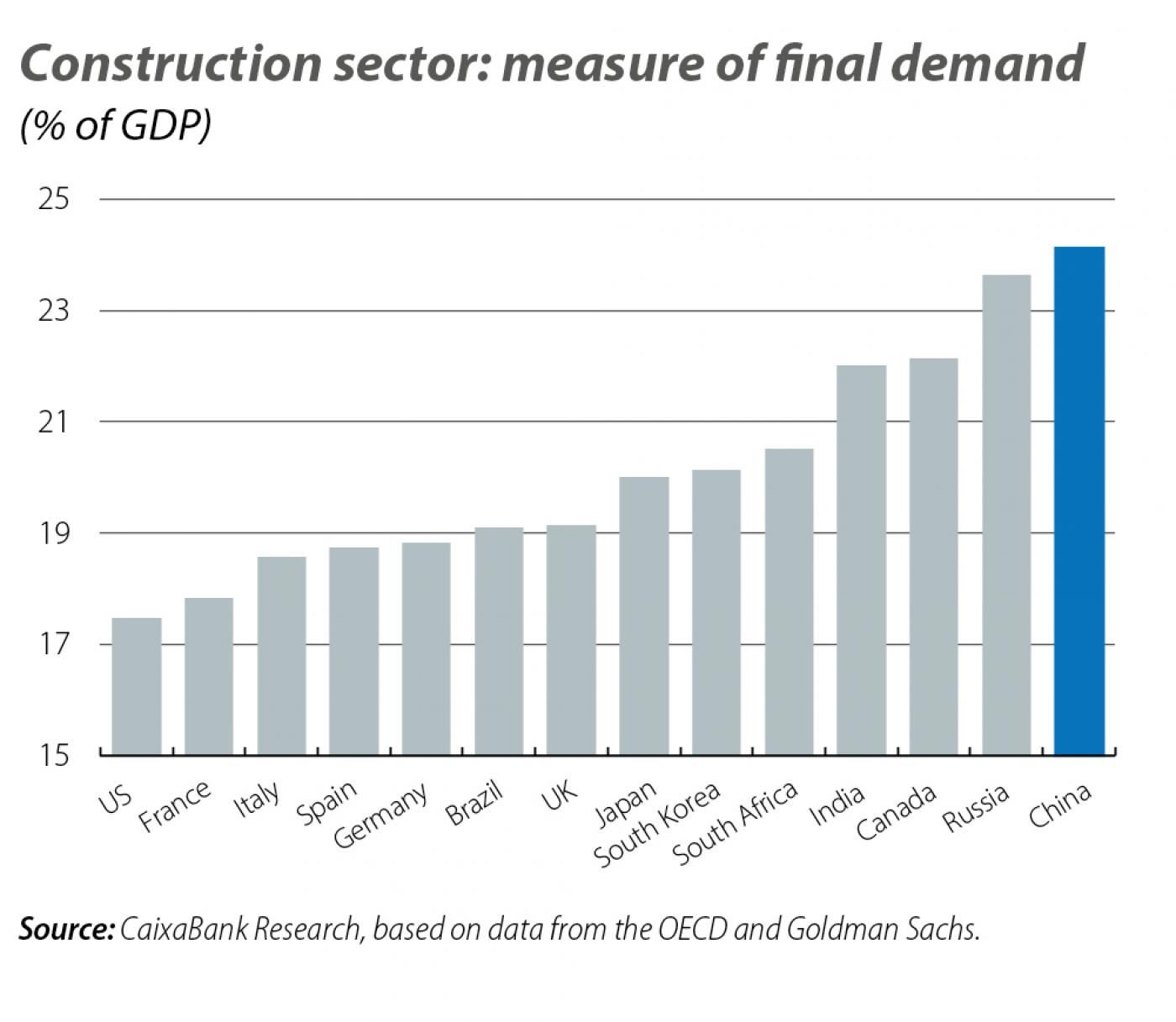 How big could the Evergrande effect get?

In the medium term, the decline in investment in construction was already expected and sought by the Chinese government as part of its long-term vision to promote «shared prosperity». This decline in the importance of the real estate sector is part of the change in tone (and speed) that we expected in the Chinese growth model. Despite this slowdown, it is also important to stress that real estate investment in China is expected to keep apace, given the growing trend of urbanisation and the rapid growth in citizens’ per capita incomes.

The Chinese government will seek to gradually reduce the construction sector’s «footprint» in the economy and avoid a hard landing in real estate. On the other hand, real estate services may gain prominence as the market reaches a more mature phase, and this will go hand in hand with the shift towards a greater role of the tertiary sector in the economy (as services gradually gain ground from agriculture or industry). Nevertheless, there are some risks that this soft landing could end up being somewhat bumpier. For example, a disorderly collapse of a large property developer could affect market confidence and lead to a «sudden halt» in the sector, similar to what occurred in 2014-2015 when residential investment and property prices fell sharply in a short period.

If we only considered its direct effects, a similarly large fall (of 20%) in real estate activity would cause GDP to drop by around 5%. If this slowdown were seen exclusively in the construction sector, excluding infrastructure, then the associated decline would amount to around 3% of GDP.

However, these estimates ignore the effects of financial contagion which could trigger a more uncontrolled real-estate crisis, and also they do not take into account fiscal or monetary policy measures aimed at limiting damage to the economy.

For the time being, despite the high uncertainty, the Chinese government seems intent on pursuing the long-term reforms it previously announced, and this increases the risk that the real estate sector could experience a significant adjustment. In this context, the potential risk of international contagion should be taken into consideration, and this could materialise both through a slowdown in the Chinese economy and through financial contagion caused by a sharper slowdown in the sector. This is a topic we will address in future articles of the Monthly Report. In the balancing act between pursuing the restructuring of the sector and ensuring the economic stability of the country in the short term, maintaining the confidence of buyers in the market will be key, as will be the need to isolate other sectors as much as possible from the aspired real estate adjustment.